An Interview with Daniel John – Part 2

Has this type of Harmonious Merger of the Gospels existed before?

Long before there were the four Gospels that we have today, placed side-by-side as a collection in the New Testament, the four accounts of Matthew, Mark, Luke and John were combined in a merged harmony called, the “Diatessaron“, in about 160 CE.  The creator of that unified Gospel account was a man named Tatian, who was a student of Justin Martyr in Rome. After Justin died, Tatian continued his school, until he came into conflict with the Church of Rome, and left the city. 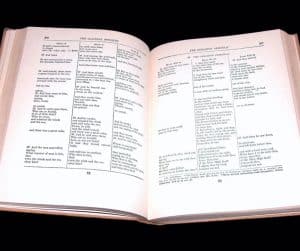 It should be noted that in the year 160 CE, when Tatian was compiling his merger, there were many Gospel accounts, and collections of the sayings and teachings of Jesus Christ, being circulated throughout the growing church. By some accounts, there were more than 20 such “Gospels”. Of those, Tatian used just four, the same four accounts that are found in every New Testament of Jesus Christ today.  Why he used these four Gospel accounts, in favor or lieu of the others, was likely because he knew John’s Gospel to be inspired, and perhaps he used the other three because they were so similar.

The Diatessaron used about 96% of the Gospel of John, and added to it material from the other three Gospels.  Where two or more of the accounts were parallel, or synoptic, Tatian generally chose the version of the saying or event that contained the most detail. And perhaps this was a way of dealing with the three very similar and over-lapping accounts of Matthew-Mark-Luke, by ensuring that the essential details of the stories were preserved from each.

As the Diatessaron was much more complete than reading even any two or three Gospel accounts, it grew in popularity, and became widely accepted throughout the early church, from Rome in the west, to Byzantine in the east.  Over time, the Diatessaron replaced the use of all of the other individual Gospels, and it remained THE Gospel used throughout the church for a period of 250 years.

Due to some of his views, Tatian was considered to be a heretic by the Roman church – and it should be noted that the modern church, having changed over the past 1,800 years, would not consider such views and opinions as heretical today.  However, due partly to this, and also because of the editorial shortcomings of the Diatessaron, when the Roman Catholic church released the Vulgate version of the New Testament in Latin in the year 405 CE, Tatian’s merged harmony was not included, but rather, the four Gospels that he had used were presented as four separate accounts once again. So, long before there were the four individual Gospel that we have as a collection today, there was a merged harmony.

Since the Vulgate Bible of the fifth century, there have been many harmonies that align the overlapping and parallel verses in columns, side-by-side.   A harmony is a good tool to compare not only the words in the verses of the four Gospels, but it of necessity also provides a single timeline for all of the sayings, stories and events that combine to form the Gospel story of the Life of Jesus Christ. This is shown in the order by which all of the sayings and stories are ordered, including the parallel sections, from the beginning of the Gospel story to the end.

As for a new merger, which combines in some way the words or thought/concepts of the four individual Gospel accounts, there have only been a very few attempts since the Diatessaron. This has been partly due to the difficulty of the task, and also from a prohibition by the church on “altering” the words of God, which goes back to the time of the Vulgate Bible, when the Book of Revelation was added as the last book of the collection.

In more modern times, and into the twentieth century, there have been many more harmonies, and also a few mergers. Some of these have even included the use of colors to represent which words or wording came from which of the four Gospels.

Learning from past examples, and using a precise system of notation, The Synoptic Gospel – FIVE COLUMN goes beyond all previous harmonies and mergers by dividing the parallel verses into individual words, which are then aligned on a word-for-word and thought-for-thought basis, making it the most complete and accurate merged harmonization of the texts of the four Gospels of the New Testament that has yet been produced.

To learn more about the history and the formation of the Four Gospels of the New Testament, watch the nine part Overview of The Gospels Series.

Why Merge The Gospels?

Facebook
Listen to the audio: Your browser does not support this audio. Why merge the four Gospels?  It is important to preserve each ...

END_OF_DOCUMENT_TOKEN_TO_BE_REPLACED

An Interview with Daniel John – Part 1

Facebook
Why Did You Create The Synoptic Gospel? When I first read the Bible in my mid-twenties I started with the Book of Genesis, in the Old ...